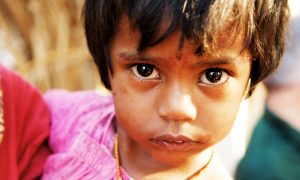 Female gendercide is real and still happening in India, every day. It is one reason why India is ranked as the fourth most dangerous country in the world to be a woman. We are committed to fighting it, saving lives, and making India safer for girls and women.

CNN recently recognized Invisible Girl Project in an article about the horrific reality of gendercide. Please read below:

The doctor who ran the small clinic in Maharashtra state has since fled, police superintendent Dattatray Shinde said. “We have teams who are looking for him.” Shinde told CNN that authorities had “received information that the doctor used to terminate pregnancy and bury the fetuses in the area.”

Another police officer told CNN that the doctor was a homeopath who did not have a surgical license.
Abortion is legal in India, but sex-selective terminations, which often target female fetuses, are not. Shinde said the fetuses had been sent for medical inspection and DNA testing still had to be done to determine their sex.

According to US-based NGO Invisible Girl Project, tens of thousands of female Indian fetuses are aborted every year.

A 2011 TrustLaw poll ranked India as the fourth most dangerous place on earth for women — behind Afghanistan, Democratic Republic of Congo and Pakistan. The most recent Indian census, in 2011, showed that for every 1,000 boys under six, there were only 914 girls, the lowest figure for girls compared to boys since India’s independence in 1947. A 2014 report by the UN Committee on the Rights of the Child said that “female infanticide and abandonment of girls (in India) remain widespread, resulting in … a high male-to-female ratio.”

The director of an international health advocacy group expressed alarm that the true scale of the number of illegal abortions in India might be hidden. “The latest case of illegal abortion clinic could be just the tip of the iceberg. Considering the deafening silence surrounding abortion coupled with the overwhelming desire for sons, there could be a huge network of various practitioners indulging in the illegal business of unsafe abortions and sex selection,” said A.L. Sharada, director of the nonprofit Population First.

Professor R. Nagarajan of the government-sponsored International Institute for Population Sciences in Mumbai, said this case showed “that both the demand and supply for (sex selective abortions) still exists” in Maharashtra.

He said it was concerning, as even strict laws preventing sex-selective abortions did not seem to be having an effect.

The UN Population Fund estimates more than 117 million women across Asia are “missing” due to gender-biased sex selection.

We are thankful for your support in helping us fight to end gendercide in India!